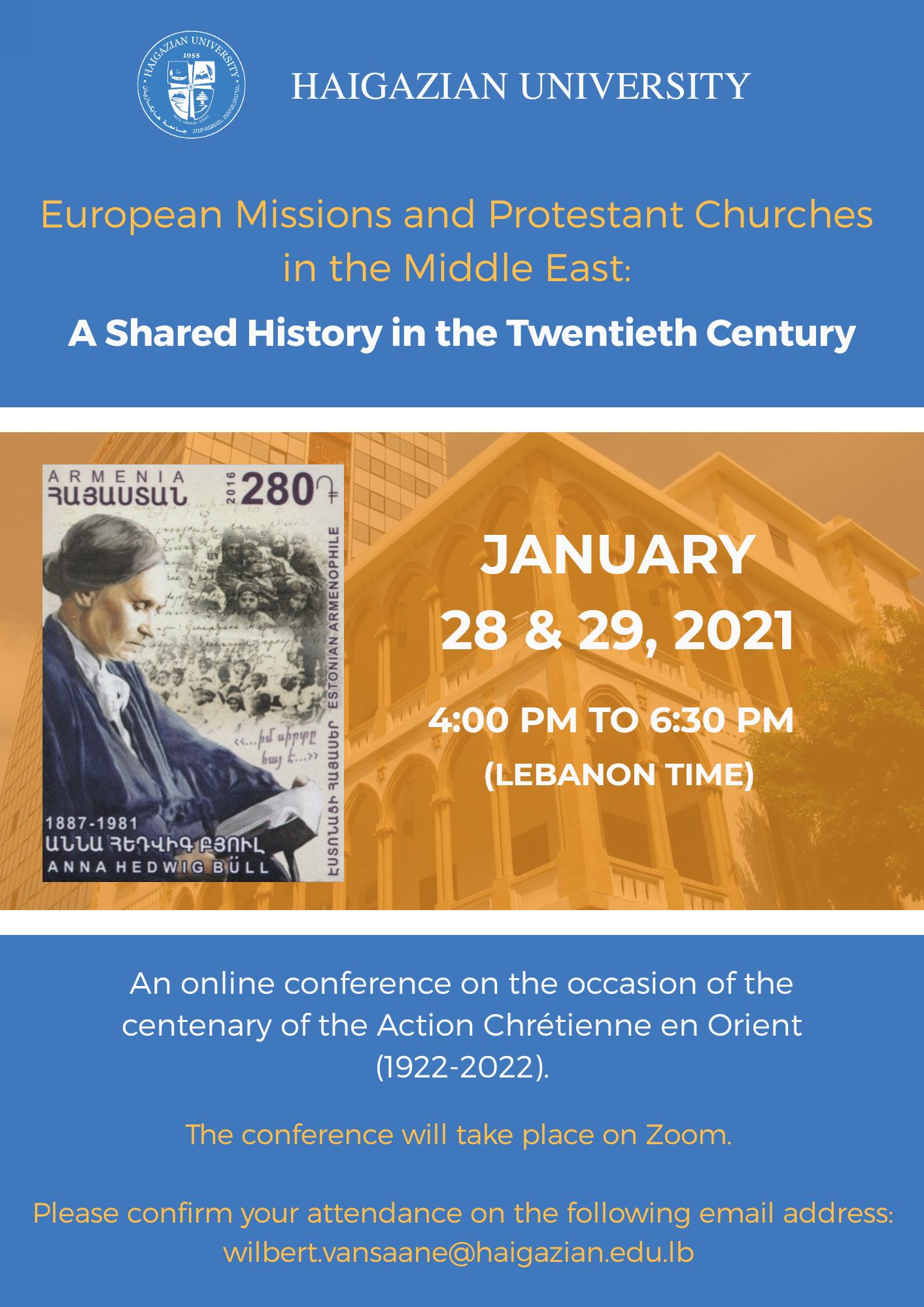 European missions and protestant Churches in the Middle East

On January 28 and 29, 2021, Haigazian University hosted an online conference entitled “European Missions and Protestant Churches in the Middle East: A Shared History in the Twentieth Century”. This event, which was organised on the occasion of the centenary of the Action Chrétienne en Orient (ACO, 1922-2022), featured eleven speakers from six different countries. Over the two days it was attended by around 90 people from the Middle East, Europe and North America, who were welcomed by Rev. Dr. Paul Hadostian, President of Haigazian University, and Rev. Mathieu Busch, General Secretary of the ACO Fellowship.

You can find below the videos of the contributions, you can find them on ACO youtube channel too, and you can download the program by clicking here.

Topic: Foreign Missionary Activity prior to and during the Armenian Genocide

« Rev. Dr. Paul A. Haidostian was appointed as President of Haigazian University (Beirut) in 2002. His appointment followed a nine-year teaching career at the Near East School of Theology in Beirut. He holds a BA degree in Psychology from Haigazian University, a Master of Divinity degree from the Near East School of Theology, a Master of Theology degree and a Ph.D. degree in Pastoral Theology from the Princeton Theological Seminary, Princeton, NJ.
In addition to his local and international leadership responsibilities in educational, ecclesial, and ecumenical organizations, Dr. Haidostian teaches, lectures and writes in Armenian, Arabic and English on a wide variety of topics including Middle Eastern Christianity, Armenian identity, ecumenism, youth, education, social issues, peace, and pastoral theology.
He is currently the chair of the Central Committee of the Union of Armenian Evangelical Churches in the Near East (UAECNE). »

Topic: The Life and Ministry of Rev. Paul Berron, the founder of ACO.

Thomas Wild is the former director of ACO France and general secretary of the ACO Fellowship (2007-2017). He is a retired ordained minister in the Union of Protestant Churches in Alsace and Lorraine. After graduating from the University of Strasbourg, he served as an ecumenical volunteer in Gabon. He pastored various parishes in the Alsace region and, for nine years, he was the mission secretary for the Protestant churches of Alsace and Lorraine (1987-1996). In this capacity he visited partner churches across the world and participated in ecumenical mission conferences. He returned to the pastoral ministry in Strasbourg, where he served the parishes of Saint Thomas and Saint Mathieu. He became involved in the ACO committee and, in 2007, he entered the service of the ACO, which he continued until his retirement in 2017.

Topic: Between missionary independence and humanitarian colonization: the work of the Action Chrétienne en Orient and the French Mandate in Syria-
Lebanon, 1922-1946

Presentation of Philippe Bourmaud:
Philippe Bourmaud is Assistant Professor of Modern and Contemporary History, Lyon III University – Jean Moulin. He has spent several years since 2000 doing research in the Middle East, mainly in the Palestinian Authority, to write his PhD dissertation on the subject : « Ya Doktor! Devenir médecin et exercer son art en « Terre sainte », une expérience du pluralisme médical dans l’Empire ottoman finissant (1871-1918) » (2007). His research topics include the history of medicine in the Middle East and in international context ; the history of interreligious relations in the Middle East ; the history of the internationalization of the question of Palestine. He is now working on the construction of social problems in the Mandates of the League of Nations, with a focus on the Middle Eastern mandates. He has done extensive research in the archives of the ACO.

Topic: ACO Women Missionaries in the Second Half of the Twentieth
Century.

Presentation of Rima Nasrallah:
Rima Nasrallah is Assistant Professor of Practical Theology at the Near East School of Theology. She holds an MA in Living Reformed Theology as well as an MPhil with a focus on ethnography and theology both from the Vrije Universiteit Amsterdam. She holds a PhD in Liturgical-Ritual studies from the Protestant Theological University (PThU), Amsterdam. Her academic interests include Contemporary Eastern Christian studies as well as the study of Christianity in Late Modernity. Her focus is the empirical study of lived theology and the practices of faith in the everyday life. She gives special attention to gender, context, performance, and the arts. Nasrallah van Saane teaches courses in Pastoral Theology, Worship and Liturgy, Preaching, and Eastern Christianity.

Presentation of Tharwat Wahba:
Tharwat Wahba is Professor of Missions, Evangelical Theological Seminary, Cairo. He earned his Ph.D. in 2009 from London School of Theology. His dissertation was on the history of Presbyterian Mission and its interaction with the Presbyterian Church of Egypt in the mission work in Egypt and Sudan. Dr. Wahba is currently professor of mission and evangelism in the Evangelical Theological Seminary in Cairo. He is also the chairman of Pastoral and Outreach Ministries Council of the Synod of the Nile, the Evangelical Presbyterian Church of Egypt. His passion is in the history of missions, evangelism, church planting and sending missionaries from Egypt. He is the author of a book, some articles, and chapters of books.

Topic: The Action Chrétienne en Orient: From Mission Agency to Fellowship of Churches

Presentation of Wilbert van Saane:
Wilbert van Saane is assistant professor of theology and mission at the Near East School of Theology and lecturer in religion at Haigazian University. He is a fraternal worker on behalf of Kerk in Actie, the mission department of the Protestant Church in the Netherlands. He studied theology at Utrecht University and obtained his Ph.D. from the same university in 2018. His thesis was about partnership in mission in the twentieth century. He was part of the ACO Fellowship on behalf of the the GZB, which is the other mission agency within the Protestant Church in the Netherlands.

Presentation of André Joly: André Joly is Retired Pastor, Evangelical Reformed Church, Vaud, and the former Chairman of the ACO Fellowship. After studying theology at the University of Lausanne, he served as a CEVAA fraternal worker in French Polynesia for four years. After his return in 1987, he served several parishes of in the Swiss Canton Vaud, the last of which was the Lausanne Cathedral (2011-2019). He has been involved in the ACO for about three decades.

Presentation of Heleen Murre-van den Berg:
Heleen Murre-van den Berg (PhD Leiden 1995) is Professor of Global Christianity and Vice-Dean of the Faculty of Philosophy, Theology and Religious Studies. In addition, she directs the Institute of Eastern Christian Studies. Earlier, she held the chair of professor of World Christianity at Leiden University where she also served as vice-dean of the Faculty of Humanities. She published extensively on Christianity in the Middle East, especially on the Syriac/Assyrian traditions. Key publications include (with Karène Sanchez, and Tijmen C. Baarda, Arabic and its Alternatives: Religious Minorities and their Languages in the Emerging Nation States of the Middle East (1920-1950) (Brill, Leiden 2020), (with S.R. Goldstein-Sabbah, eds), Modernity, Minority, and the Public Sphere: Jews and Christians in the Middle East (Brill, Leiden, 2016) and Scribes and Scriptures: The Church of the East in the Eastern Ottoman Provinces (1500-1850) (Louvain: Peeters, 2015). In 2017, she was elected a member of the KNAW (Koninklijke Nederlandse Akademie van Wetenschappen) and she received the Hans Sigrist Prize of the University of Bern. In March 2019, she won an ERC-Advanced Grant for the research proposal ‘Rewriting Global Orthodoxy: Oriental Christians in Europe (1970-2020),’ which is executed at Radboud University (Faculty of Philosophy, Theology and Religious Studies), from October 2019 to September 2024.

Presentation of Marina Behera:
Marina Ngursangzeli Behera is Research Tutor and MPhil Stage Leader at the Oxford Centre for Mission Studies. She is also the Editor of ‘Transformation,’ a journal published by the Centre.
She is from Mizoram, a state in Northeast India and belongs to the Mizoram Synod of the Presbyterian Church of India. She obtained her M.Th. in Missiology from the North India Institute of Post Graduate Theological Studies, a joint programme between Bishop’s College, Kolkata and Serampore College. Her D.Th. in the History of Christianity is earned from the Federated Faculty for Research in Religion and Culture in Kottayam, Kerala, India.
From 2005 to 2012 she served as an Associate Professor and Chairperson in the Department of the History of Christianity at the United Theological College (UTC) in Bangalore, India. From September 2012 to July 2016 supported by the CWM she held the chair of Ecumenical Missiology at the Ecumenical Institute, Bossey, a programme of the World Council of Churches and attached to the University of Geneva.
We are grateful to Dr Behera for serving as listener during this conference and publishing the proceedings of this conference in the journal Transformation.